“Don’t judge a package on your porch by its weight.” Isn’t that a proverb? Doesn’t it go right along with “Don’t judge a book by its cover”? Today, we received a small parcel from Baker Creek Seeds, the heirloom seed people from Mansfield, Missouri. As I picked up this package, which put a decent dent in our bank account, I was struck by how light it was. A t-shirt would have come in about the same sized package, tipping the scale similarly. 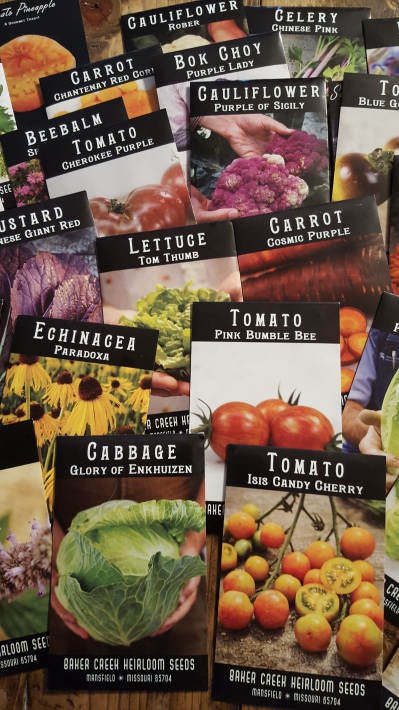 After getting over my initial disappointment at the smallness of the package, I considered the potential of those seeds.  We probably won’t plant all of them, despite having nearly an acre that could be dedicated to garden this year, but let’s just imagine one variety.

Look at the “Pink Bumble Bee Tomato” package pictured here. The little envelope contains (according to the catalog) some 25 seeds. Let’s imagine that we get 20 of those to grow and produce fruit. A good plant can yield somewhere between eight and twenty pounds of tomatoes. If all twenty of those plants were to give us the minimum of eight pounds, we’d have 160 pounds of cherry tomatoes to consume. That’s 160 pounds from one of 44 packets of seeds! And if we could value our tomatoes at a cheap one dollar per pound, we’d more than pay for our seeds with just the fruit from this one variety. What’s more, if we were inclined, we could save the seeds from a few of our tomatoes to grow even more next year.

The Christian life might not look like much to those who don’t understand it, just as a bunch of seed packets don’t look like much to people who think vegetables grow in cans. But we know that, like a seed, that inauspicious thing will grow and turn into something marvelous, something better tasting that even the best grocery store can offer. Perhaps that’s why Jesus shared the Parable of the Sower and of the Mustard Seed. In Psalm 126:6, we read “though one goes along weeping, carrying the bag of seed, he will surely come back with shouts of joy, carrying his sheaves.” I’m pretty sure that the Hebrew word translated “bag of seed” actually means “expensive shipment of seeds from a small town in Missouri.”

2 thoughts on “The Potential in a Seed”