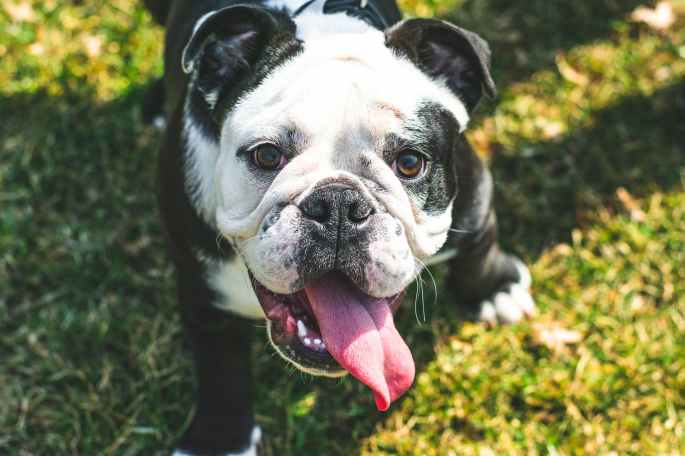 “Human sacrifice, dogs and cats living together, mass hysteria!” That’s how Ghostbuster Peter Venkman described the bad things about to happen to New York. While the whole premise of Ghostbusters was pretty ridiculous, I have to shudder at the idea of dogs and cats cohabiting. It seems to run against the nature of things.

My name is Mark, and I am an unapologetic dog person. During my adult life, I’ve been head over heels for a Brittany Spaniel, a Great Pyrenees, and, currently, a Standard Poodle. I’d swim across a piranha-infested river and battle ostrich-sized mosquitos for my dog. A cat? I usually wouldn’t mind feeding it.

I will confess that at times in my life, I have been the possessor of both a dog and a cat, but that was always when we lived in the country. The cat (or cats) always stayed outside and served rodent-control duty. When my youngest daughter procured two cats in her new home, I nearly disowned her.

My dedication to dogs over cats explains the giddiness that I feel when I read that among pet owners, dog people are happier than cat people. I’m not making this up. A genuine study came up with the conclusion, so it has to be true.

Dog people, in other words, are slightly happier than those without any pets. Those in the cat camp, on the other hand, are significantly less happy than the pet-less. And having both appears to cancel each other out happiness-wise.

As a dog person, these words make me even happier. My proclivities are vindicated.

But as I’ve thought this over, something strange occurred to me. While I very much prefer the company of a dog to that of a cat, I personally probably behave more like a cat than a dog. I’m not naturally social, preferring solitude a good deal of the time. Is it strange that a dog person has the personality of a cat?

My wife, also a dog person, is much more of a dog personality. Although she rarely barks at people when they approach the house, she’s very happy to spend time with them when they arrive–just like our dog. And not surprisingly, people tend to enjoy her company much more than they do mine.

There’s no giant spiritual point that I can draw from all of this. I am who I am. My personality will probably not shift dramatically as I age, although I have been getting more sociable in the last several years. Still, it would probably be good for me to continue moving in that direction.

The sociable dog might fight now and again, but it will typically stay in its pack. It will be loyal and enthusiastic. It will sniff out all newcomers rather than ignoring them. Dogs are dependable.

It’s hard to imagine the Kingdom of God being dramatically enlarged by a bunch of cats.

O house of Israel, can I not do with you as this potter has done? declares the Lord. Behold, like the clay in the potter’s hand, so are you in my hand, O house of Israel.–Jeremiah 18:6

A few months ago, Penny and I procured a new dog, Beau or Bo–I’m not sure how we spelled it. Beau is a standard poodle, but before you start scoffing at the idea of a poodle, let’s be clear. A standard poodle is a cool dog. He’s about the height of a golden retriever, lean and athletic. We don’t keep his hair cut in that ridiculous poofy look at you see sometimes. Trust me–real poodles are great dogs.

But like any dog, Beau came into our home and tested the boundaries. He wanted to establish exactly where he stood in the grand scheme of things. Most of all, he wanted to establish that we weren’t the alpha dogs, the bosses of his pack. It took a while, but I think we have pretty much succeeded. Beau now cooperates and goes to his kennel at that word. He’ll mostly come when called, although he’s still terrified of Livie’s boyfriend Sam.

Dogs are wonderfully sensible. When they learn the hierarchy of things, they’ll live within it. If Spike is stronger than Fido, then Fido will mostly fall into line and yield to Spike’s leadership. People can be sensible in that way. That’s why we pull over when the police turn their lights on. We know they have the power and so we yield. That’s why we file our taxes every April, knowing that the IRS can make our lives miserable if we don’t.

However, we don’t always assume that the police or the IRS are right or all-powerful. I have argued successfully with the IRS on a couple of occasions. I’ve never gotten into a high-speed chase with the police, but there’s still time for that. Realistically, we only fight the power that we think we can overcome. We fight when we think they’re not really the alpha dog.

While you might beat the police or the IRS, you will not beat the ultimate alpha dog. When God asks Israel if he doesn’t have the power to overturn them like clay, he’s not really asking a question. He’s asking them to see the reality of it. What can God do with us? Anything He likes. Can we resist His will? Only as far as He allows.

If we cannot manage to behave like clay, yielding perfectly to the potter’s hands, perhaps we should at least try to be sensible like dogs.

Cassie, our Great Pyrenees, went missing earlier today. Rarely does she wander out of sight of the house, yet this morning we could find her nowhere. Since I had seen her in the woods just down the driveway, I decided to check that spot. I still haven’t discovered what she’s been doing in that area, but she did appear behind me when I walked to the locale.

The odd thing about this is that Cassie is so dependable. She lazes around the house all day so that she can go on night patrol, barking at anything that approaches too close and keeping the livestock safe. She’s even started picking up eggs laid in out-of-the-way places, and bringing them down to the front door. What an animal!

Cassie does not take the trash out, fetch the mail, or feed the chickens. As much as I would appreciate the help, I don’t expect it. She’s a guard and herding dog. At those tasks, she’s proven completely faithful.

When the author of Hebrews mentions Moses again, I find it surprising. After all, he’s just spent two chapters differentiating Jesus from Moses and the angels, so why then compare Jesus with Moses? Then it struck me that, having shown the two to be incomparable, the writer can now praise Moses in the same way that I can praise Cassie.

As much as I appreciate that dog, I’ll prefer Penny in a heartbeat. And the same goes for Christ over even the most faithful of humans.

To which of the angels did God ever say,
Sit at my right hand
until I make your enemies
a footstool for your feet?
Are not all angels ministering spirits sent to serve those who will inherit salvation? (Hebrews 1:13-14)

Last night, Irene the turkey met her end. Having lost her mate, Earl, to our dinner table last fall, Irene had fallen in among the chickens and seemed happy to lead a chicken-esque life. Then, a couple of weeks ago, I realized she begun laying eggs again. In the past day or two, it seems, she had completed her clutch and began to sit on them. With Earl out of the picture, I seriously doubt those eggs would ever have hatched unless an adventurous wild turkey had made his way into the chicken yard. The question is moot now.

Cassie, our Great Pyrenees, apparently intervened in the attack but could not stop Irene from being hauled off into the night by, presumably, coyotes. We were left with a flurry of brown feathers and some 10 eggs. We assume it was Cassie who brought the eggs down to the house. I don’t imagine the coyotes were quite that responsible.

Modern life involves attempting to insulate ourselves from as many of our enemies as possible. To this end, we lock doors, pay for insurance policies, eat properly, and fasten seatbelts, yet day after day demonstrates that not all enemies can be stopped. The final enemy, death, can be delayed but has not been beaten by human means.

But through Christ, all of Christ’s enemies, who are also the enemies of man, have been or will be vanquished. Hunger, illness, war, and death will provide the legs for that footstool of enemies. Jesus will put his feet up and invite us to join in the restful comfort. As much as I appreciate Cassie the guard dog, I’ll opt for God’s enemy plan instead.

This morning, Kate has been running about the yard, barking at the geese and checking out the haunts of the neighborhood ground squirrels. As you’ve probably guessed, Kate is our dog, a Brittany Spaniel, given to us several years ago by a neighbor.

For the most part, Kate does all the things you’d want a dog to do. She growls and barks at intruders. She comes when you call her. Most importantly, she does things that should be done outside outside.

She also, on occasion, does things that aren’t particularly desirable. A couple of times, left on her own in the basement, she has dug through the trash to get at some enticing smell or another. When I come down and find the mess, though, Kate will cower on the floor. She knows she’s done wrong, and she doesn’t want me angry with her. She also, from time to time, runs off when we let her outside. Perhaps she chases a bird or some outside smell. We’ll yell for her to no avail. Inevitably, though, she’ll show up an hour or so later, returning home, the place where she gets food and water, a dry bed, and access to our bedroom during thunderstorms. From these actions, I deduce that Kate loves us.

Why does Kate love us?  I’m not delusional enough to believe that there’s something particularly noble or lovable about us. And there’s nothing especially discerning about Kate. Kate loves us because we take care of her. It’s that simple.

Let’s not be prideful in our love. We’re like Kate, barking at the door. We’ve run off or been in the trash, but God still loves us, feeds us, and shelters us. God is certainly man’s best friend.