The Son is the radiance of Gods glory and the exact representation of his being, sustaining all things by his powerful word. (Hebrews 1:3a)

Today I had a grand experience, helping my daughter to move out of her old apartment. As marvelous as moving can be under the best of situations, this one topped the list. You see, we moved her family out of the apartment but not into a new place. The reason for moving? They had a house fire that rendered the building uninhabitable.

With the electricity now turned off and the broken-out windows covered with plywood, the apartment was dark. I raked through wet sheet rock and charred paneling to try to locate salvageable items, all the while limited by the narrow cone of light coming from a head lamp.

You don’t appreciate the presence of light until you don’t have it. You don’t realize how incredibly dark a place can be–a place full of sherds of glass and jagged boards–until you’re there with the windows covered. Darkness, I can now attest, is not conducive to successful searching or moving.

I mention this because of the description of Jesus as the “radiance of God’s glory.” Radiance fills a place, a situation, a life, or a world with light. That feeble head lamp I wore this morning offered only a tiny fraction of the radiance provided by the sun through the windows or the lights on the ceiling. But even those normally ample light sources pale by comparison to the radiance of God’s glory.

God is so amazing that even the train of His robe filled the heavenly temple with glory according to Isaiah 6. That vision so overwhelmed Isaiah that he knew himself to be in deep trouble having witnessed it in his sinful state. That full glory of God overwhelms. But in Christ, the radiance of that glory comes to earth in a form fit for human experience.

Isaiah also tells us that the people who walked in darkness have seen a great light (Isaiah 9:2). I understood a small glimmer of that experience as I walked from the darkened bedrooms of Emily’s charred apartment into the well-lit living room. How much more light do we receive from Christ.

In the past God spoke to our ancestors through the prophets at many times and in various ways. (Hebrews 1:1)

We live in a communication-rich world. Just this morning, I’ve managed to communicate with my two oldest daughters without setting eyes on either one of them. Between the ubiquitous cell phone, the text message, Twitter, Facebook, and good, old-fashioned hollering, we can communicate through many channels and with the greatest of ease. Emily, on a train to Chicago, managed to take a photo of the grandkids with her phone and, using Amtrak’s wifi, post it to Facebook. That so beats the squalling I heard when they rose at 5:00 this morning. 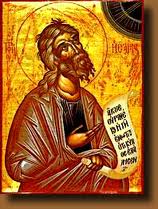 I appreciate the ease of communication that we enjoy, but that ease does not equal profundity. Even that most prolific of the prophets, Isaiah, wrote relatively little by the standards of the world. Compare Isaiah’s sixty-six chapters to the 1,056 lines that comprise Milton’s Paradise Lost. Or the 100 cantos of Dante’s Divine Comedy. Yes, both of those works are quite profound, but many even longer works–think of perhaps one of James Michener’s vast novels–make up for their lack of importance with a hefty page count.

God spoke to our (Hebrew) ancestors at many times and in various ways, but he did not blather on endlessly. Read the life of Abraham to see how a series of powerful experiences were interrupted by long years of normality. If Isaiah wrote at a steady pace, which he probably did not, he would have churned out just the equivalent of a chapter each year throughout his career.

A young Christian expects God to speak clearly, powerfully, and pretty much nonstop. As we move through our lives, we recognize that most of the time even the still, small voice is a great deal more definite than what we hear from God. We need to learn a lesson from those Old Testament prophets, listening carefully in order to be ready for those rare eruptions of God’s “outside” voice.