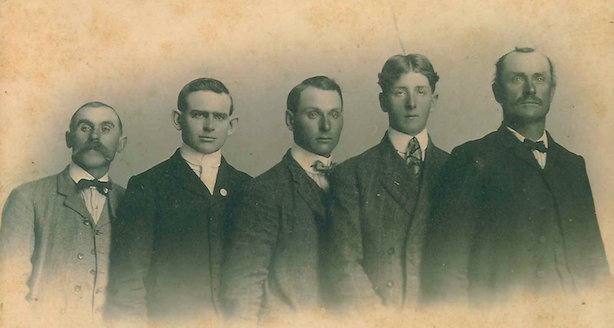 A girl stands at the depot waiting for the train that will take her away from home. She glances over her shoulder, hoping to step onto the coach before being seen by anyone who knows her. Down the track, the exhaust from a steam locomotive marks its approach. She might just get away without being seen.

Yesterday, I mentioned that I visited Pilot Grove, Missouri, but I didn’t say what took me there. My mother was born near that town. Her mother’s family, going back to 1820, lived in the neighborhood. Another branch of her family came to Cooper County, Missouri in the early 1850s, directly from Germany. I headed to Pilot Grove to do some research on these segments of my family.

One of the fascinating bits that I gathered yesterday was the will of Christian George Oswald, one of those who came from Germany. Christian is a solid American success story. He arrived, worked hard, and bought his own farm. Then he bought more and more land, eventually giving those properties to his children upon his death. Christian was busy in that regard. Five of his six sons are pictured below. He also fathered four daughters. It’s one of them that perhaps stepped onto that train.

The guy pictured at the far left above is Sherman Oswald, my great-grandfather. When his father died, Sherman received a somewhat curious inheritance: 9/10 of the 80 acres on which he then lived. Why 9/10? The other tenth was given to his eldest sister, Elizabeth, with a stipulation: “if she is located within two years.”

Whatever happened to Elizabeth Oswald? She appears on the 1870 census, aged 11. She’s not in the Oswald home in 1880, and there’s no other Elizabeth Oswald elsewhere who matches her details. I had always assumed that she died, but if Christian thought she might be located within two years, then she wasn’t known by the family to be dead. She also was apparently not known to be married since they referred to her as an Oswald. At least 23 years after she failed to appear on the census, Christian still held out hope she would come back.

I presume that Elizabeth left home, probably in less-than-cordial circumstances. and never looked back. Her mother died in 1869. Dad remarried in late 1870. One can imagine various reasons why a teenaged girl in the mid 1870s might have headed out of town.

We can hope that Christian behaved like the father of the prodigal son, eagerly scanning the road for his child to return. It’s the stuff of Hallmark movies and sentimental stories that all parents are eager to bring their wayward child home. The ones I’ve know with wandering kids have felt that way. But I don’t know about Christian Oswald. Is his giving of the equivalent of eight acres compared to everyone else’s 80 a clue? Or was he simply being realistic about the chances of her returning?

I like to think of this old man, in the declining days of his life, surrounded by children and grandchildren, constantly pining for the one who was missing. Whatever happened to Elizabeth Oswald? I’ll probably never know, and I’ll probably never know how eager Christian was for her return. But I do know that there is one who will always leave the 99 to reclaim the one.